About a fifth of San Francisco offices were vacant at the end of the third quarter of the year, but the strongest rental activity in two years suggests the start of a market recovery, experts say.

The city’s vacancy rate was 20.5%, up slightly from 20.1% in the previous quarter and 14.1% for the third quarter of 2020, according to real estate brokerage Cushman & Wakefield.

“The third quarter has been significantly better” than expected and offers “a silver lining,” said Robert Sammons, senior director of Bay Area research. The brokerage had expected the vacancy rate to climb to 23% this year, but plans to revise that number, possibly to a lower amount, he said.

“They need to encourage their employees to return to the office. They need high quality space, ”he said.

The biggest lease of the quarter was the 191,833-square-foot deal from fintech company Chime at 101 California St., which was also the biggest new deal during the pandemic.

Pinterest, which canceled a huge lease at 88 Bluxome St., renewed the lease for its corporate office at 651 Brannan St. for 121,000 square feet.

Other leases have been signed by the startups Retool and Notion; Citi Ventures, the investment arm of the big bank; and Yelp, which is moving its headquarters from 140 New Montgomery to 350 Mission St. as part of a sublease with Salesforce.

Bloomberg reported in July that Google and Facebook would visit offices in San Francisco, but no deal was signed. 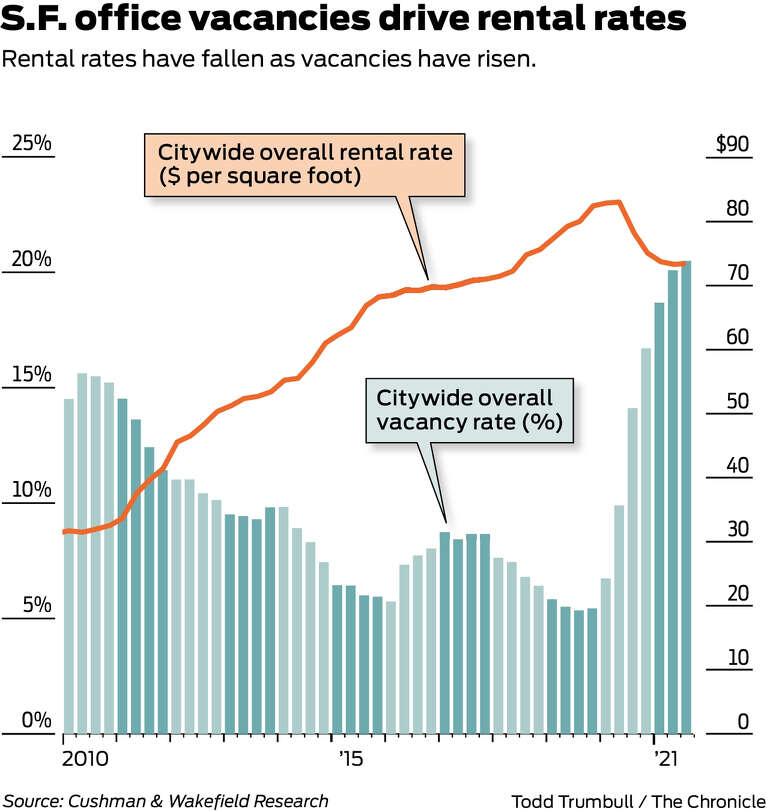 “San Francisco has always been resilient. You go back over 100 years, whether it was fires, earthquakes or the dot-com collapse, we’ve always come back strong, and generally we’ve brought the economy down. , and I think that’s going to happen with us today, ”said Chris Roeder, a JLL broker, at the View From the Top real estate event at law firm Allen Matkins last month.

“At the end of the day, I think we’re going to come back stronger than ever, but it’s going to take a year or two to work out,” he said. One of the main reasons for optimism is the continued influx of venture capital investments.

Venture capitalists invested a record $ 156.2 billion globally in the second quarter, and Silicon Valley and San Francisco accounted for $ 23.7 billion in funding, by far the largest for any region and nearly twice as many as in previous years, according to CB Insights.

“These venture-backed companies are hiring. We have a very low unemployment rate, ”Roeder said. “We feel very optimistic just about the companies and their performance. “

“Tours have increased dramatically over the past 60 days,” he said. “We are getting a really good response. “

The project is part of the 5M development, which is a partnership between Brookfield and Hearst, owner of The Chronicle, whose office is next to the new tower.

The key to the city’s revival will be the return of office workers to the city center, which was complicated by the delta variant, Sternberg said.

“I think we are more productive by being together, listening and sharing ideas,” he said.

Your 2021 recap of the (many) housing projects in Traverse City

The burden of the global property tax extends to non-capital areas: DONG-A ILBO

How candidate Greg Lenkiewicz seeks to retain the community of Salina